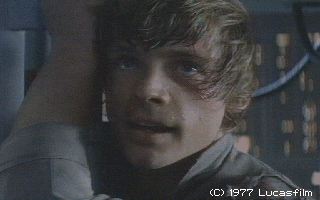 I have to admit something. I am a conservative–not when it comes to social issues or family values or even personal responsibility, but when it comes to Star Wars, I don’t want massive amounts of computer generated effects.

Some things are wonderful for what they are, not for what they could be. A few years ago, I was talking to Lee Killough, whose books I loved about ten years ago when I found them. She told me that she was coming out with electronic versions for the Kindle, and that she would update them, adding modern technology, cell phones and computer searches.

Part of me wanted to yell at her just like Luke Skywalker: Nooooooooo! Her books may have been set in the eighties, but to me that just added to their charm. I loved her novels so much, I didn’t want to see anything changed.

I had a similar feeling tonight when I was reading a thread on Reddit, asking people how they felt when Darth Vadar revealed he was Luke Skywalker’s father. The thought jumped into my head that I should buy bluray disks of all the Star Wars movies. Then I remembered the re-re-re-editing that George Lucas had done.

Don’t get me wrong. George Lucas owns Star Wars and he has the right to do whatever he wants with it. However, I have the right not to spend my money on his sad, bastardized, over-edited re-releases.

Okay, let’s drop the Star Wars rant–no matter how well deserved–and get back to my point.

A year ago, I read the Ray Bradbury’s Martian Chronicles. Were they dated? Yes. Were they irresistibly charming? Most definitely!

A while before that, I read Max Allen Collins First Quarry. Max set the story in Iowa City during the 70s, when he was at the Iowa Writer’s Workshop. He carefully researched it, not letting false memories get the best of him, and produced a work worthy of that era.

I guess what I’m saying is I love the nostalgia of bad predictions. It seems silly that an author would work hard to eliminate the markers of the era they wrote a story in. In my opinion, it does not add to a story but detracts from it. The futurism of 30 years ago can teach us much more than the futurism of today.

Wow, what a weekend. For the second time, I participated in the Paradise ICON workshop which runs concurrently with ICON, the Cedar Rapids area SF convention.

Friday morning started a day of critiques with the Paradise ICON attendees. I’m going to be lazy here and paste in their twitter accounts: @SplitLegend @bluemaven @ransomnoble  @cathschaffstump @GeorgeGaluschak @CoreKnell and @timothycward. I was a little nervous getting into critiques with people I’d never worked with before. Fortunately, George Galuschak’s piece, my favorite was up first.

One of the nice things about working with more skilled authors is they all know how to take criticism. It’s not that I want to be mean or gruff, but if you genuinely don’t connect with a piece, you need to be able to tell them that and explain why without them getting upset. Even if they don’t agree with you, you owe it to them to tell them how you felt.

After eight critiques, my time was my own. I’d intended to meet up with the Paradise crew at the bar, but I was too busy catching up with Adam Whitlatch, Lars Pearson, and Dylan Moonfire. It’s funny, when I first started coming to cons, I thought it was weird that people would come to socialize, play games, and do crafts, things that they can do at home or with their friends. Outside of the writing workshop that was mostly what I did.

My Saturday started out with lectures from Nancy Kress and Gregory Frost. Having read Kress’s Beggars in Spain, I was already excited to hear what she had to say. She spoke on the subject of character arcs and what makes a believable character. She also had a really nice character worksheet.

Greg Frost’s talk was an eye-opener for me because he talked about the differences between short stories and novels, and I have never been able to master the short story. Even now, I am planning a short story that goes against the advice he gave… I know. I know. It will probably fail, but I’m still going to try.

After lunch, we were supposed to get a Q&A from Ellen Datlow. Unfortunately, she couldn’t make it, so I went downstairs and wandered into a panel on Dungeons and Dragons. I ended up having a very enjoyable time. Not only were the two local game masters very knowledgable and had good things to say, but Jim C Hines was on the panel. Jim had some interesting things to say about teaching morality and math.

Then I went to a panel on Doctor Who. My friends Adam and Lars were on the panel. Now, if you don’t know Lars Pearson, he is a walking encyclopedia of Doctor Who. His company Mad Norwegian Press publishes gigantic compendiums of Doctor Who essays and facts. As a panel member, he is a clever, hyper-animated–I hesitate to call him elf, but… yeah, elf.

Then we went to a nice dinner before our Paradise ICON rapid-fire reading. We were up against a Joe Haldeman reading and the cosplay Masquerade, so the attendance wasn’t great, but I still managed to be plenty nervous. Mostly we read pieces we had worked on in our group, but I was totally blown away when Tim Ward read his short story Cornhusker: Demon Gene, which was awesome.

After that, I went to the post-apocalyptic survival panel, featuring King Zombie Sean Beaty, Adam Whitlatch, and Jess Whitlatch.

Then I spent the night in the bar.

Sunday was a nice quiet day. The paradise crew went to breakfast, and then I attended a panel on cover art, featuring my friend Adam Whitlatch. After that, I attended a radio-style play done by the BrassGears Adventure Society. Finally, I finished off my weekend with a reading by Adan Whitlatch–you might have guessed that Adam and I get along well.

It was a tremendously fun weekend. I am a farm boy. Okay, I’m not half the farm boy that some of my high school classmates are, but I have operated farm machinery, shoveled manure, and thrown a hay bale or two thousand.

So, when I found out that my wife not only didn’t know how they made the giant round hay bales, but also had no idea how a combine worked, I decided we had to take a field trip into the countryside. 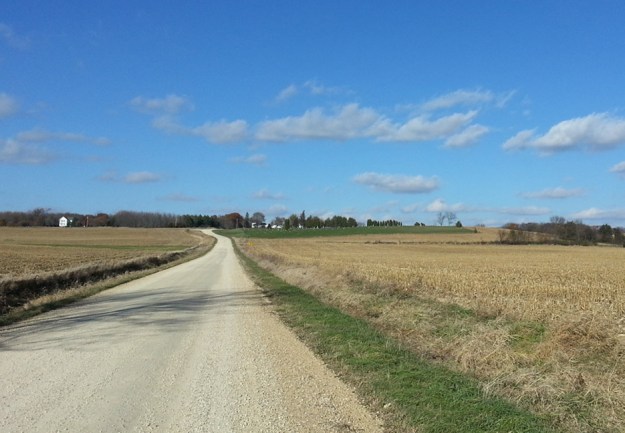 For some reason, whenever we take a field trip into the countryside, no matter where I turn off, we eventually end up on this road, with this little graveyard in the distance.

We meandered around the gravel roads, while I explained the internal workings of the modern combine harvester. We were lucky enough to see two such creatures in operation on our trip. One was even emptying its kernels into a gravity-box wagon.

Then we found this historic bridge, though there was not a sign to tell us why it was historic, nor was it very interesting, and the bank had just been re-graded and was nothing but waste concrete and gravel. So here’s a picture of the opposite bank: 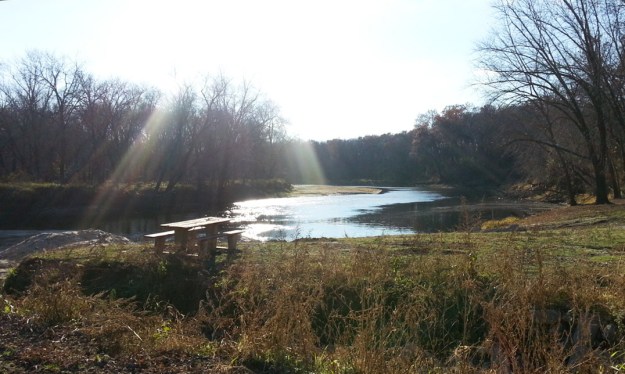 You may notice the streaks of sunlight in this shot. I lost the battery charger to my good camera with all my fancy filters and its awesome zoom lens, and I had to use my cell phone. I did not get the best shots.

Finally, we ended up at the Anamosa State Penitentiary grave yard, which I also will not show you a picture of. Here is the view of what was across the road. 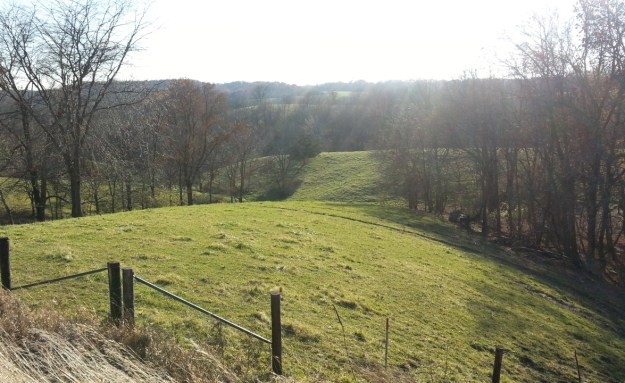 Again, I’m shooting into the Sun. I was hoping to get a shot like this, however. So many times I hear people say Iowa is flat, or that when Grant Wood painted rolling hills in Iowa, he was making it all up.  But no, really. We have stuff that looks like this. 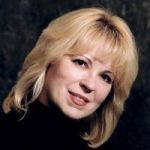 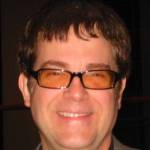 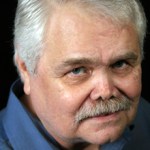 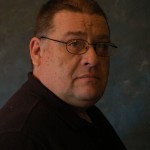 Hrmm, do I need a disembodied head photo, or is that just a mystery writer thing?

Last night, Mystery Cat was way over capacity, to the point that the room was uncomfortably hot. I arrived twenty minutes before start time, to get the last standing-room space that gave a view of the authors. It was good of them to come out, but I yearned for a more intimate, or at least more comfortable, setting.

I had never seen Ed Gorman or Matthew V. Clemens before. Gorman was witty, fun to listen to, and surprisingly glib about politics. He also gave a few interesting details about his years as a political operative and speechwriter.

Clemens is not a name I’d heard before, but he apparently has written or collaborated on more books than I’ve read, including several with Max Allen Collins and Ed Gorman. He had some very insightful comments about the collaborative process.

I am a huge fan of Max Allen and Barbara Collins, and I always enjoy seeing them. However, every time I go to see them, they are more popular. They talked about their newest collaboration, Antiques Chop, and MAC’s new Nathan Heller book, Ask Not, which follows a conspiracy following the Kennedy Assassination.

As the authors finished speaking, and the audience turned into long lines, I gave up on the idea of buying a book and getting it signed, let alone a chance to chat with Max and Barbara. Like a callow youth, I fled into the night, sweaty and unsatisfied. 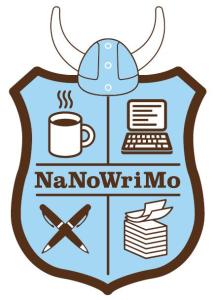 National Novel Writing Month starts today. Last year, I took time off from work to finish it, but this year, I’m just going to let it pass me by. This is partially because I’m managing a project due December 1st, and I just can’t afford the time. But it’s also because I have too much editing to do, and I really should finish a book one of these days.

My starting a book to finishing a book ration is about ten to one. This means I have a lot of source material to work with, and assuming I finish half of my works in progress, I will have a healthy body of work. But that’s a lot of ass in chair time. It’s a lot of hard work time vs. creativity time.

Never fear though. I’m putting in significant time on these pieces. I just need to finish something one of these days.