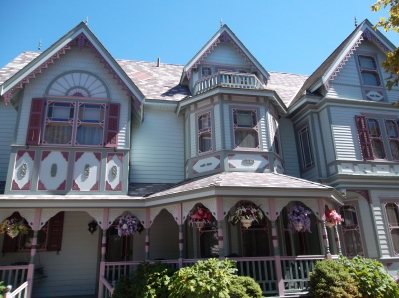 This was not the house we were in, but it kind of looks like it if you squint and turn your head sideways.

Friday night, I participated in my first paranormal investigation of the year. I have not yet reviewed the evidence, but enough interesting things happened, I figured it was worth an initial entry while everything was in my head.

One of the most interesting aspects of this investigation was the venue, a pair of old victorian houses which had been combined to form an office building.  We were joined on this investigation by employees who’d had experiences in the building. As soon as we went inside, things were very active. Several times, I would hear someone say something, only to have someone around me freeze and say, “Who just said that?” Not only were we clearly hearing voices, but they were strong enough that we were mistaking them for each other talking.

Before we started the investigation, Cat, a very powerful psychic, felt pulled to one of the upstairs offices. I followed her up to see what was going on. The room she went to was very organized, and Cat said that in life the entity that lived there had loved order and cleanliness, therefore she liked to spend time in that office. One interesting thing Cat said was that the spirit did not like that little fan sitting on the desk. I speculated this might be because some small high-speed motors produced strong electromagnetic fields.

As we were coming down the stairs, I thought the person in front of me said something unintelligible, until she turned around and asked me, “Did you hear that?” and I realized the voice I had heard was not hers.

Another person, a Reiki practitioner who is very spiritually aware, felt a presence with her for most of the night. Cat’s theory was that she reminded the spirit of someone they had known in life and they were attracted to her energy.

We split up into two teams and each took a side of the building, comprised of one of the original houses. My team started in the house we had less historic information about. We did know that it had started as an upper-class home before being divided into multi-unit apartments and finally moved to be attached to the other house for office space. During that time, we had one more “Okay, who said that?” experience, but most of the show was stolen by our psychics who were picking up a lot of activity in almost every room.

During our investigation of the first floor, Cat told us to stay away from one particular office. I asked the employee with our group if the two positions officed there had a high turnover rate, and the employee with us said that they had actually gone through a few people in those jobs in the last couple years, which I assume is higher than average for the kind of work they do.

I know this is sounding a little like the Cat show, but when she is in full tilt, I generally just keep the recorder on her and hope that whatever she’s sensing leaves a message on the recording medium.

For about the next hour, things were pretty much the same. We checked out the rest of the rooms. I recorded. Cat got impressions. The K2 didn’t pick up anything. And the spirit that was following us around followed us around.

Then we switched houses with the other group, who also experienced a lot of activity.

For the next two hours, we got nothing, and neither did the other group. It’s like every spirit in the two houses spent all their energy talking to the first group. It was interesting hanging out in other people’s offices, but beyond that very little happened.

It will be interesting to see if any EVPs came through during the investigation, but I have to be honest, I’m sort of dreading going over the five hours of recording.

McMaster University in Ontario is holding a conference in honor of Robert J Sawyer called Science Fiction: The Interdisciplinary Genre, which is an apt name. However, I think Ali G summed it up just a little bit better: