I keep thinking it, so I might as well say it.

Tiny Bubbles rose to the the Billboard Easy Listening #8 position on the charts. Despite it’s roots in pop music, many consider it the quintessential Hawaiian song. 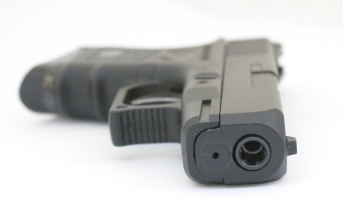 It’s really too early in the morning for my writing process, so I’m wasting my precious time procrastinating.

Now suspense means holding events up to cause mental uncertainty. You can do this in very obvious ways, like ending each paragraph in a cliffhanger, but of course this kind of lewdness only leads to things like bestsellers. You can also do more subtle things, like moving important details to the end of a paragraph. This, of course, doesn’t cause a great deal of mental uncertainty, but it does land the pertinent details at the end of the paragraph, where the reader naturally pauses. This gives an extra millisecond or two to let that detail set in.

So, back to my story. Here is the original paragraph:

Lance turned off the screen and left the little viewing room.  As he stepped into the corridor, he nearly ran into two men who were walking by. Lance recognized one of them and nearly screamed, letting out a little “AH!” sound. He was wearing a white uniform with a gun on its belt, and he had grown a pencil-thin mustache, but he was definitely the same man. The other man was Ed Bennet, the station owner. He had aged since making the video, but it was him.

And here is my edit:

Lance turned off the screen and left the little viewing room.  As he walked into the corridor, he nearly collided with two men. One of them was Ed Bennet, the station owner. He had aged since making the video, but Lance could tell it was him. When Lance realized who the other man was, he nearly screamed, letting out a little “ah” sound. He wore a white uniform now, and he had grown a pencil-thin mustache, but he was definitely the same man, Lance’s guidance counselor, Raul del Rio. He wore a gun on his belt.

I called this the July Update because it’s my first update since June 10th. That’s really good new though. I’ve written 14,000 words in the last three weeks, despite being busy at work.

I’m getting some really good things out of my new draft the science fiction piece, Stuck in the Midpoint–or whatever I’m going to call it. In lieu of better content, I’ll leave whet is, for now, the first few paragraphs.

Lance looked up at the Singapore Station space cannon, a long black tower reaching into the sky. From his perspective on the ground, it could have gone on forever. Orange bumps clung to the side of that tower, hurtling into the heavens at extraordinary rates. Despite the heat, he shivered. Two weeks ago, he had graduated High School. Two days ago, he had been in Indiana. And two days from now, he would be in space.

He ran his hand over his forehead and dried it on his pants. He tapped his wrist Crony. “What is the current temperature in Singapore?”

The little computer on his wrist answered, “It is currently eighty-three degrees in Singapore. Todays high will reach ninety-five.” Well, at least he wasn’t going to be here for that, or he would be, but he’d be in suspended animation and several thousand feet up by that time.

His liaison officer patted him on the shoulder. “Time to get in.” He opened the hatch of the orange cargo container and a blast of hot air poured out. It smelled like something rotten.

Smiling apologetically, the liaison officer said, “Well, it’s not exactly first class.” He motioned for Lance to go inside.