I’m doing what may be the final re-write of my book Panic No More, about Nick, the son of a formerly prominent family who is harassed by the Goat God.

I think this is my fifth re-write of this book, and part of the reason why I’ve never been satisfied with it is I never quite started it off right. I had lots of good ideas, but I could never quite nail down the first scene.

Then I had an epiphany. I was so worried about what other people would think of my beginning, I forgot to write what I wanted to write. I had done all the things that the books on writing tell you to do, but I wasn’t really happy with it myself.

I was trying to eliminate the long front porch and get quickly to the character interaction, and jump immediately into action, saving the backstory for later. And the more I did all of those things, the more I didn’t like it.

So, instead of jumping right into the action, I started over 150 years before the story starts. And I think it worked. I like it, at least. Here’s a taste:

In 1852, Nick’s Great-Great Grandfather Clayton Earl Baker moved from Philadelphia to Iowa and made his home in the newly-founded state capitol of Iowa City, which he believed would soon become the next gateway to the west, a bustling metropolis which would rival St. Louis in size. He was wrong, of course.

The capitol moved on in 1857, but by then Clayton had set down roots, sinking his entire fortune into a factory which produced his patented dental instruments and anesthetics, and building Baker House, an expansive Victorian home, which rivaled many eastern estates in its opulence if not its size.

On Sunday, I really wanted to write. I didn’t rush into it though. It had been a while, and I was afraid my juices might not be properly flowing. On the wisdom that sometimes the anticipation is more rewarding than the actual consummation, I purposefully did not write for most of the day.

I often fail at creative endeavors before noon anyway, being more of a night person.

I sat down in the early afternoon, and put finger to keyboard, only to have to spend the next forty minutes dealing with a broken printer and trying to figure out how to reset the default fonts in Scrivener, which I forget how to do every four weeks. After that, I spent twenty minutes having a mini-breakdown. Then I had a coffee.

For some reason, every time I sit down to write, I am nearly paralyzed with the worry that I will have somehow forgotten to write like I write, and will end of with a Dan Brown novel, or John Grisham, or someone who is simply not me.

Finally, I was ready to write, and, to my amazement, I seem to still be capable. I’ve been averaging 900 words a day ever since. This might not seem like a great deal, but, for me, it means as many cylinders are firing as are ever likely to. 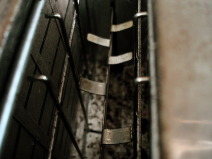 Many years ago, I bought a new toaster. It looked really cool in the store. It was round. You put the bread in diagonally. The bread was “caught” by an internal mechanism in the toaster and glided gracefully into the warming position without the need for unsightly levers. When I got in home, despite a good deal experimentation and my high hopes, I had to come to a conclusion:

My new toaster made crappy toast. It was always burned in one corner and not toasted at all on the opposite corner. Eventually, we threw it away.

The toaster we have now looks pretty much like the one I grew up with, only slightly larger to accomodate bagel halves. The controls are exactly the same, with the exception of a “bagel” button. Maybe toasters just don’t need that much improvement.

This is why I was intrigued by Apple’s decision to call its new iPad “The New iPad.” I feel like they’re admitting, given what people use tablets for right now, The New iPad won’t need much improvement. This kind of makes sense to me, as tablets are hermaphrodites–they aren’t phones, and they’re not laptops. They’re great for web-surfing and playing games, but I don’t see them moving out of that niche. Sure, new models will have a faster CPU or more storage, but there’s only so much you want to do with a 10″ tablet.

I believe we are seeing the same trend in laptop screens. For a while it seemed like 17″ or even 19″ would be typical sizes, but as the rest of laptop hardware is getting smaller and lighter, screens seem to be settling in at around 11″ to 15″. Sure, there are some outliers, like the HP HDx 20, with its 20″ display, and hardcore gamers want bigger screens, but it seems most consumers are looking for sleeker models.

My current laptop is solid state, except for two cooling fans and has pixels smaller than I can see. Writing this article takes 4% of the CPU and even though I’m lazy about closing windows, I am only using 1/2 of the RAM. Sure, a few terabytes of storage might be nice, but until we move beyond the paradigm of a windowing operating system, I don’t think I’ll really need more. Oh, and I wouldn’t mind a week or two of battery life and batteries which would last a decade.

I really hope that someday soon, the computer fulfills its destiny and joins the ranks of the toaster–an appliance you buy once, does everything you need, and it pretty much just works.

I wrote this article for ParABnormal Magazine, and it appeared in the March 2012 edition. I have included some new graphics, a few hyperlinks, and the Chris Moon video. 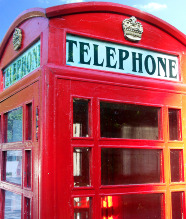 From offerings in ancient Egyptian necropolises to seances in Victorian parlors, people have searched for ways to communicate with the dead. Now, as we begin the 21st century, television reality shows, non-television-ready paranormal groups, and curious individuals are using electronic devices to help understand the afterlife.

On investigations with two ghost hunting groups, I have collected and analyzed recordings which I believe are communication from the other side. This article will show how to use electronics found in your own home to record spirit voices, and explore some of the more complicated methods being used for spirit communication.
END_OF_DOCUMENT_TOKEN_TO_BE_REPLACED 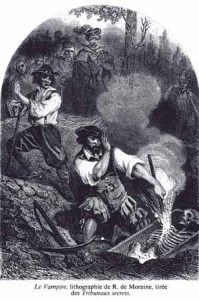 I’ve meant to write something her for almost a week now. Whenever I try, I get sidetracked. I took a couple weeks off at the end of Camp Nanowrimo, and after my staycation, I’ve returned to work and discovered just how stressful my job can be.

The new novel, FANGS FOR NOTHING, is all ready to go. Things have been hung up at the cover design stage. It has an ISBN, and you can even order it on Barnes and Noble. Hopefully, I’ll see something soon.

On a personal note, I’m taking a brief break from writing. I’ve been working my tail off for years now, and using my vacation time to get more writing in. Don’t worry, I will be coming back with a vengeance, or with aplomb if you prefer. I’m just charging up my batteries.