This week, I attended Convergence in the Twin Cities for the first time. It was a great experience, but the number of attendees (we saw badge numbers over 6000) combined with sleep deprivation sometimes left me a little frazzled. 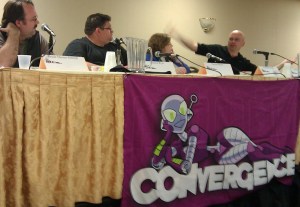 I look on as Kelly McCullough gesticulates

Because of the huge number of people, we had to stay in one of the overflow hotels. This was all right, because they ran shuttles both from the hotel we were in and from the host hotel, though finding out the schedule the first day was a little nerve-racking. The first night, I wasn’t 100% sure I was going to make it back to my hotel.

The programming page of the Convergence website suggested signing up for 10 panels if you wanted to be on three. I signed up for nine, including some that were a bit of a “Hail Mary”, assuming I would get 2 or three. I ended up on seven panels.

My least favorite topic as a panelist was “Keeping the next book fresh,” which I’ve pictured above. While I enjoyed meeting Bryan Thomas Schmidt, Kelly McCullough, and Tamora Pierce, I felt a little under-qualified for this panel as I haven’t published a lot, and I never have trouble coming up with fresh ideas. 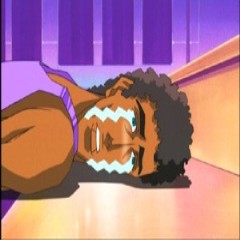 My favorite topic as a panelist was “Women of Star Trek.” I was honestly worried about this panel. I know how people get about their Star Trek. At one moment, I came to a realization that I was speaking to over 100 people about Star Trek. I was almost moved to tears of happiness, but I held them back, as the might have seemed awkward to the other people in the room.

My favorite event as an attendee was “Verbing the Noun” a stand-up comedy act by comedian Joseph Scrimshaw. I owe a special thanks to my wife, Stephanie for talking me out of bailing when I saw how big the audience was going to be. The containment unit from the Ghostbusters room

I also attended the famous Convergence room parties. My favorites were the Ghostbusters room, the Star Trek room, and the Orange room, where I tried an Orange Crush and cake-flavored vodka drink and a orange Jello shot.

By Saturday night, I had honestly had enough con. I’d already done so much stuff, seen so many cool costumes and gotten so little sleep, I kind of ran out of gas. I ended up sitting on the hotel patio, talking with friends. Then, I went back to hotel early (midnight) so I could get some sleep.

On Sunday, right before I left, I had an awesome reading. It wasn’t highly attended, but the people that were there laughed their asses off. It’s always fun seeing people appreciate your work first hand.

7 thoughts on “A Convergence Newb in King Arthur’s Court”