If you’re like me, you’ve been getting a few notices from SchoolFeed, a Facebook app that makes a yearbook for everyone you went to school with. To me, this is a great example of an app that goes too far. From what I’ve read on the Internet–the most accurate source there is–as soon as you sign up for this app, it immediately sends requests to all your Facebook friends without telling you.

This seems to be confirmed by the fact Hugo Award Winning author Robert J. Sawyer just sent me a request. 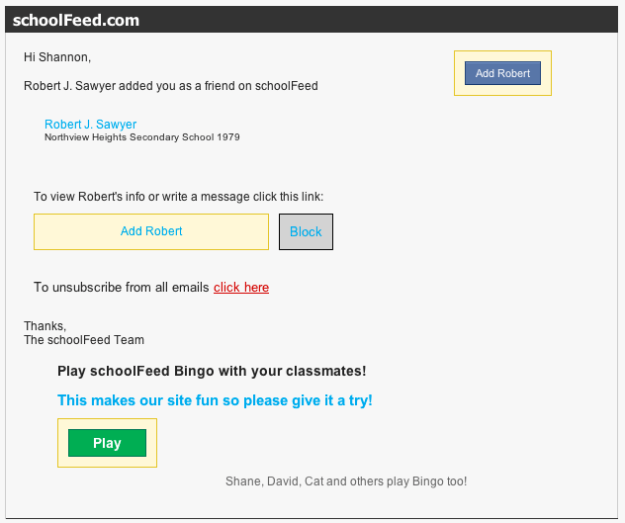 Now, I’m a big fan of Robert J. Sawyer, and I’ve liked and commented on a few of his posts, and being a guy who’s very good to his fans, he’s liked and commented on a couple of mine. I hope that someday I will hit it big, and we’ll beta read for each other. But I have no illusions that if someone asked him how Shannon was doing, he’d either say, “Shannon who?” or think they were talking about some other Shannon he knew. I’m pretty sure he wasn’t sitting around thinking about classmates to add and landed on me, especially since we went to high school 15 years apart and in different countries.

So no, Robert, I won’t be signing up for SchoolFeed. It’s nothing personal. I hope we can still be friends. 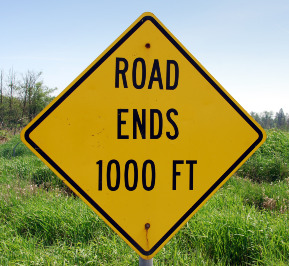 During critiques, I often hear writers agonizing over whether their plot is too predictable. Because I write semi-humorous stories, this isn’t something I worry about too much.

As always, my goal is to write the best, most entertaining, story I can write. If that means I write it with a predictable plot, so be it. Almost ever romance novel uses the same plot, and that doesn’t stop them from being read and enjoyed. I never doubt that Mike Hammer’s going to get the bad guy.

Ultimately, I contend the empathy for the protagonist is what keeps a person reading. That’s what makes me happy. Oh, and a good dash of graphic sex and violence.

The Smashing Pumpkins video “Tonight, Tonight” was directly inspired by it. 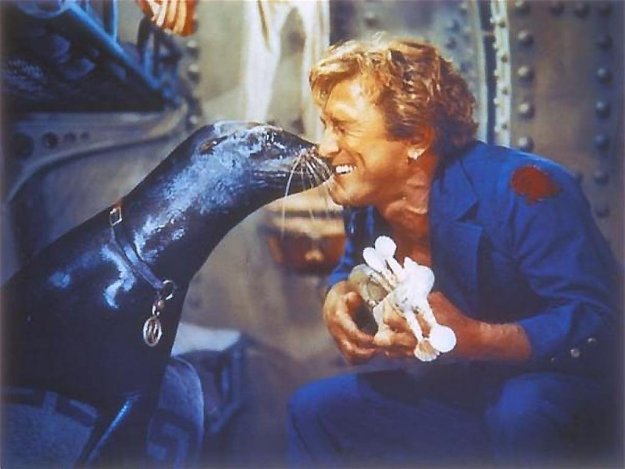 Last night, I went to the Mindbridge Film Group, and we watched a great movie, Disney’s 20,000 Leagues Under the Sea, staring  Kirk Douglas and Peter Lorre. For a film of its age, it’s weathered well, and I quite enjoyed it.

I was, however, a little surprised at the scene where Kirk Douglas gets a seal drunk. Now, I’m sure Disney did not actually get a seal intoxicated, but it still struck me as being a little off for an older Disney movie.

The scene reminded me of how much we’ve changed as a culture in the last 50 years. In addition to a drunk seal, everyone in the movie smoked like a chimney. Of course, this movie was filming during the same time I Love Lucy, a show where they drove home the idea that offering a cigarette was the only sophisticated way to greet a visitor. Six years after this movie came out, the Andy Griffith Show premiered, in which a regular recurring character was Otto, the lovable town drunk.

It amazes me that while some things once common have become so taboo, we’re currently going through a second sexual revolution, even here in Iowa, where coming out as gay or admitting you have the same kind of sexual interests and drives as the average person isn’t quite such a big deal anymore. 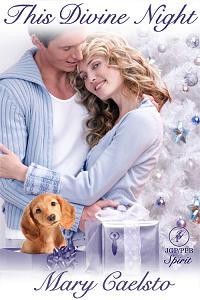 My friend Mary Caelsto, who has written more books than I have read, is offering a free seminar on starting your novel. 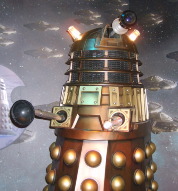 I returned from Demicon last weekend and was immediately incapacitated with the worst stomach flu of all time.

I spent most of the week watching Ancient Aliens, a program which contends that every mystery of the ancient world can be answered by aliens. Sounds good to me. Although, I have to wonder that if ancient aliens were so prevalent, why we haven’t found at least one microprocessor. I mean, you can barely spit without hitting one these days, and we’ve only made it to the moon.

Being sick made me think about all of life’s little hassles, and the need for complications and tension in stories. It seems like the two would go hand-in-hand, like peanut butter and bananas. However, for some reason, this isn’t true. People expect tension, but only if that tension is related to the character arc, the plot, or a subplot.

In The Last Boyscout, Bruce Willis finds out his best friend is sleeping with his wife. This seems like character-building unrelated to the plot until his best friend’s car blows up because it was parked outside his house all night. This takes about 3 minutes to happen in the movie, He ends up showing what a boyscout he really is by avenging the death of the friend who slept with his wife to satisfy his personal code of justice.

Putting a random stomach flu on a protagonist just wouldn’t make for a good story. Maybe it’s because of what I write, but I don’t think people want to read about things that can happen to anyone in real life. It might work for some comic relief with a secondary character though. Regular vomiting could work as a running gag.

That’s it for tonight, ladies and gentlemen. Try the veal.

Okay, this is a cone, not a con. It was the only picture I could find.

A few years ago, I started attending SF conventions.

The first one I attended was my local ICON in Cedar Rapids, but the next  year, wanting to try out a few more, I attended DemiCon. I found DemiCon to be a blast. This year, I am now attending my third, and I’ve decided to be a panelist.

I am usually sitting at the back of the room, thinking people don’t want to hear what I have to say. However, during the cons I attended last year, I sat in on a couple panels where I thought I could have been a good contributor, so I decided it was time to pull the trigger.

I’m crossing my fingers and hoping I’ll do a good job. 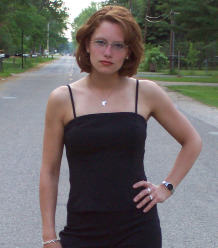 This woman is standing in the middle of the read. WTF? Get out of the road.

After spending last week at Mason House for a paranormal investigation, I’m going to turn around and spend this weekend at DemiCon, the Des Moines science fiction convention.

Both of these activities were great and worthwhile, but I find I am absolutely squirrelly trying to find time to write. Last night was burned on lawn-mowing and research, trying to get a new short story started.

I don’t know if it’s going to work out. Short stories are not my strong suit.

So, today, I had to be rude to people at lunch, which I don’t like to do, but sometimes, you have to make room for the writing. On the bright side of things, I got something done. Hopefully tonight, I’ll get something done as well. However, I might have to let the back yard go to seed.